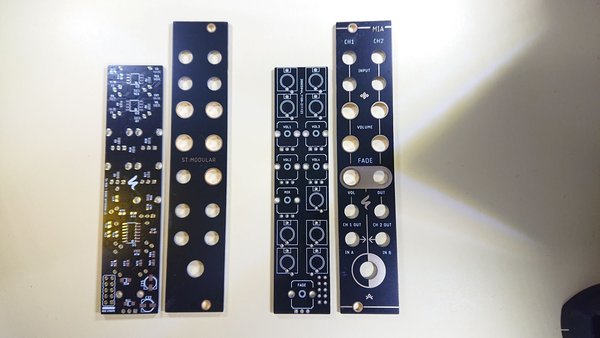 MIA is a simple but fairly handy 2x2 channel mixer with an optional fader output.

CH1 & CH2 have two input jacks with VOLUME control potentiometers each. The signals inserted here will be mixed and supplied at the CH1 & CH2 outputs. Simultaneously the signal will be routed to the FADER. The summed signal of CH1 & CH2 will be available at the FADE output. Using the Fade potentiometer you may mix the two channels to taste. The overall FADE volume may be adjusted using the FADE VOL potentiometer.

If there is a cable plugged into the IN A or IN B jack, the connection of the mixer channels to the FADER is interrupted. Thus you can mix 4 sound sources and fade two additional signals at the same time.

Originally this mixer was designed to mix several VCO waveforms with the ability to route each of the mixed signal (from CH1 OUT & CH2 OUT) to external modules, such as effects and filters, and then again mix the externally processed signals (using IN A & IN B) to one single output (FADE out) via the fade circuitry. In some cases it might even be serve as a stereo mixer.

• Volume Control for each Channel