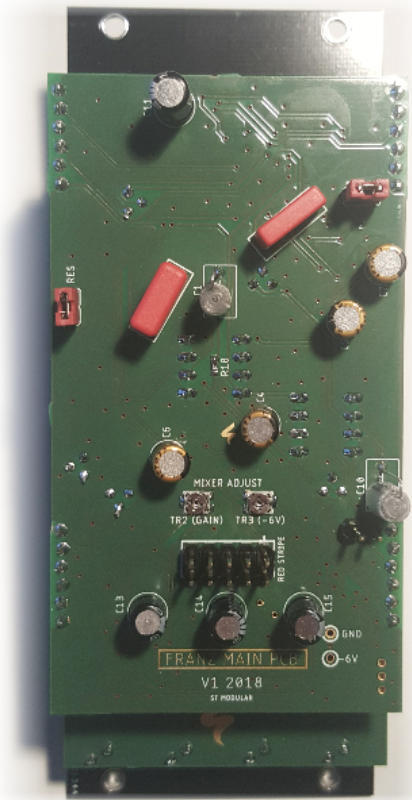 The filter is based on the CA3080 chip and offers four different outputs:

You may adjust the CUTOFF frequency and RESONANCE by the dedicated knobs. In addition to the filter circuit this module also includes a resettable LFO offering a TRIANGLE and SQUARE wave. The LFO is internally normalized to the Filter CUTOFF and its effect can be attenuated with the knobs CV1/TRI and SQU/CV2. The two waves may be applied at the same time and can be reset with an external trigger source.

The normalization of each LFO waveform is interrupted as soon as you plug an external CV source into the CV1 or CV2 input jacks. The LFO Rate may be changed with the LFO Rate potentiometer. Its speed is indicated by a bi-coloured LED.

In order to layer waveforms you will also find a transistor based 3 channel mixer on the bottom of the module. The sum of the mixer is directly routed into the filter and also passed to the MIX output jack. The volume of the mixer inputs can be adjusted per channel (VOL1-3) and all together with the filter INPUT potentiometer.