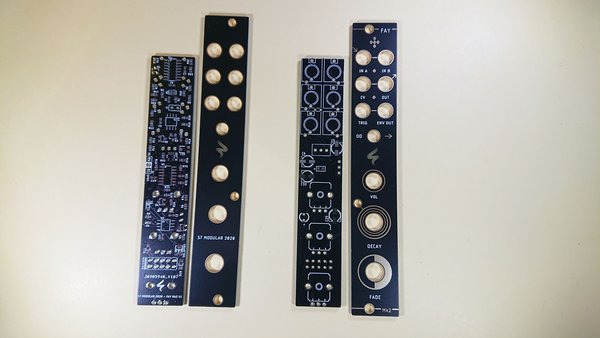 FAY Mk2 combines four functional units in a tiny 4HP Module. It consists of a Fader, a VCA, an Overdrive and a Decay/Release Envelope.

If you insert two audio sources into the jacks IN A and IN B you may fade between both sources manually using the potentiometer on the bottom. This way you can either mix two waveforms or switch between them. The signal is directly routed to the VCA. Here you can control the volume or amplitude of the audio either manually or via control voltage using the CV jack.

If there is a trigger signal at the TRIG input you will be able to control the VCA with the internal decay or release envelope (selectable via jumper). Simply insert a trigger signal into the TRIG jack and use the potentiometer below the LED to control the decay length. The LED indicates the current state of voltage. The envelope time can be set to 10ms or 3s via jumper. Thus it can be very snappy for percussion purposes. The decay or release envelope is also provided at the ENV OUT jack to control external modules via CV.

Additionally there is an OVERDRIVE option that may be activated via switch, It is also affected by the CV input and shapes the sound to a certain extend. The OVERDRIVE is fairly subtle and more audible on short decay times. Nevertheless it really crunches up some simple waveforms.

In contrast to the first version FAY Mk2 has an improved PCB layout and now only consists of one PCB to solder.