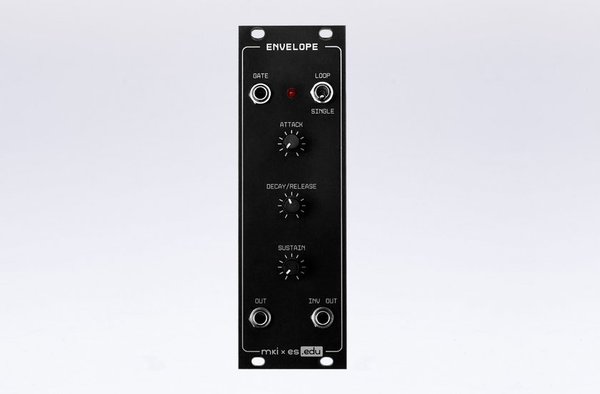 Many iconic sounds like the squelchy acid bass line, snappy techno kick drum, and swelling dream pop pad wouldn’t be possible if it weren’t for envelope generators. So, the next module in the mki x es.edu line is a slightly optimized ADSR envelope generator. Optimized because it has only 3 controls. With sustain on, it outputs an ASR (attack/sustain/release) envelope, but when the sustain is set to a minimum, it becomes an AD (attack/decay) envelope generator that ignores gate length; Release and Decay are controlled by the same knob. A looping function and an inverted output make the module more versatile for complex patches.

The full EDU DIY system is designed to have 2 EG modules, therefore everyone aiming to build the whole system will need 2 kits.

Erica Synths and Moritz Klein – have developed a series of educational DIY kits under the brand name mki x es.EDU with one specific goal in mind: to teach people with little-to-no prior experience how to design analog synthesizer circuits from scratch. What you’ll find in the box is not simply meant to be soldered together and then disappear in your rack. Instead, you are wanted to be taken through the circuit design process step by step, explaining every choice they’ve made and how it impacts the finished module.

In total, they have developed 9 kits to build a fully-featured modular monosynth: a sequencer, a VCO, a wavefolder, a noise/S&H module, a mixer, a VCF, an Envelope generator, a dual VCA, and an output stereo mixer with a headphone amplifier. Additionally, an affordable eurorack case with a DIY PSU will also be available. While these kits are easy to build, they did not compromise on design and functionality. They will launch one kit every 4-6 weeks. Each kit comes with an extensive user manual (40+ pages PDF-Download) that will dive deep into not only the electronics behind each circuit but also the fundamental principles of sound synthesis. They hope that the mki x es.EDU project will inspire future engineers and will contribute to the ever-growing diversity of electronic music technology.