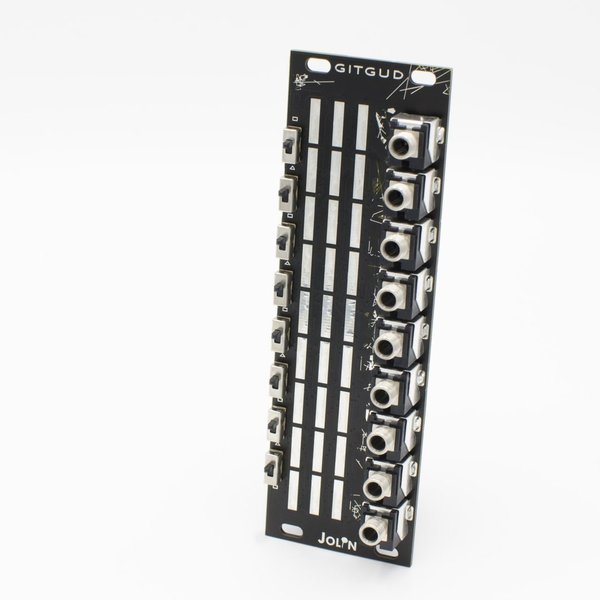 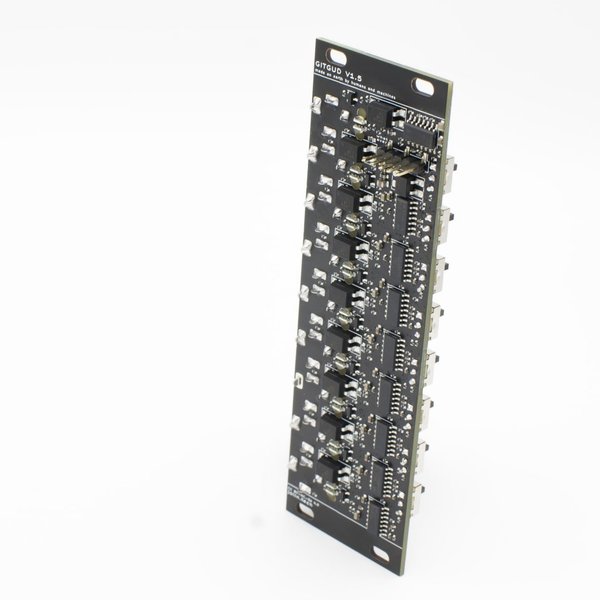 Jolinlabs GITGUD is a pack of 9 individual LFOs – 5 squares and 4 triangle waves.

• To move stuff all around

• Filters – create a relation between the cutoff and the resonance

Let’s consider the first LFO. As we can see from the graphic sign on the right it will output a square.

“The frequency is set with analog touch controls; they act like potentiometers and they keep the value once the finger is lifted from the surface. As it takes time to turn a pot, it takes time to interact with these controls: bridge with your finger the first line and the center III to decrease the frequency or the center and the last one III to increment. A red and a blue LEDs will light up to give visual feedback of the speed of that LFO. This is a full analogue continuous control, designed to be an expressive and interactive gateway to decrease the boundaries between the user, the environment and the music-making-devices.”

The second LFO will output a triangle wave and you can chain it to the previous one with the toggle switch above the graphic sign . If the switch is in the ON position – lever on top – the previous LFO will increase the frequency of the following one when in a positive state – blue LED lit. The longer the blue LED stays lit, the faster the following LFO will be in that moment. Considering LFO number 1, if we increase its rate the blue LED will blink faster. Being in a positive state for a short period it will not send a longer enough signal to the following LFO. If we decrease its rate, it will be positive for longer and if the chain is connected it will send signal to the following LFO increasing its rate. This chain is breakable with the switches at any point. This way the LFOs can be used individually or as a complex chained tool – a nonet modulator.

• 9 individual analog LFOs with toggle switches to chain them

• “Whatever” power connector a.k.a. don’t mind the polarity.