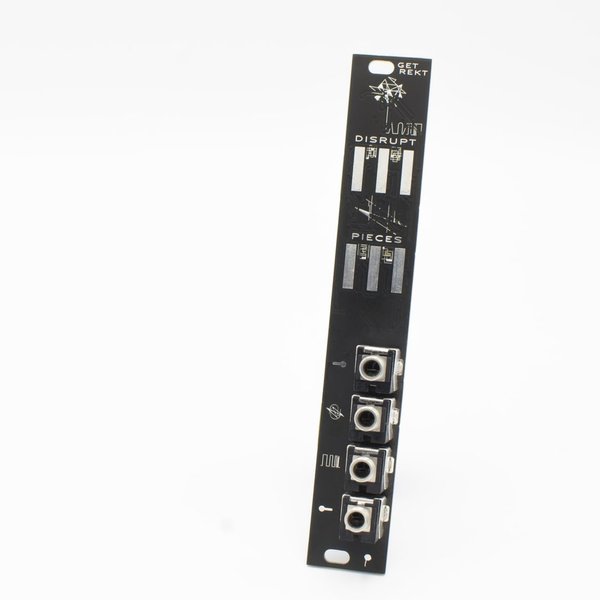 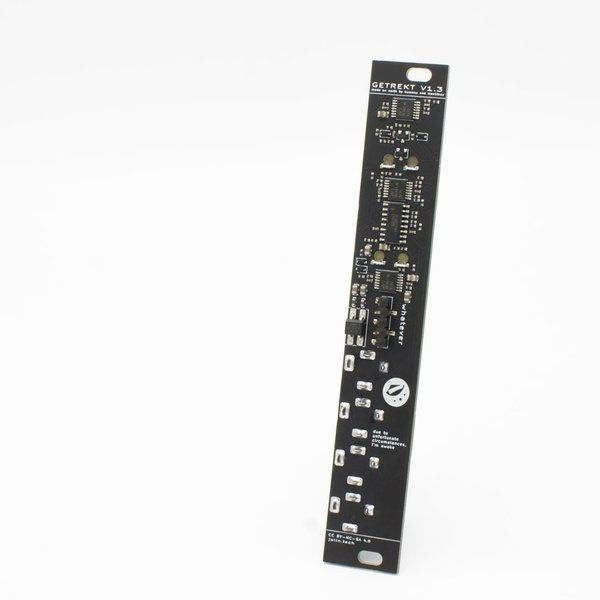 Jolinlabs GETREKT is a full analogue waveshaper – an aggressive one.

• To add saturation and harmonics

• To disrupt – folding - and cut into pieces - clipping

• To invert the polarity of a trigger or other kind of pulses.

• Complex audio sources – to control and flatten them

The circuit is designed to invert the polarity of any given input.

“Disrupt and Pieces are analog touch controls; they act like potentiometers and they keep the value once the finger is lifted from the surface. As it takes time to turn a pot, it takes time to interact with these controls: bridge with your finger the first line and the center III to decrease the value or the center and the last one III to increment. A red and a blue LEDs will light up to give visual feedback of the position of the control. This is a full analogue continuous control, designed to be an expressive and interactive gateway to decrease the boundaries between the user, the environment and the music-making-devices.”

DISRUPT: controls how much the output is affected by the waveshaper circuit. At maximum it will fold and create a total harmonic distortion.

PIECES: the pulse width of the resulting transformed wave.

Both parameters have a dedicated reactive CV input. If connected, the touch potentiometer act as an offset of the incoming signal.

• Touch Controls on the amount of effect and PWM

• Reactive CV inputs on both parameters

• Inverts the polarity of any given input

• Works with audio and CV sources

• “Whatever” power connector a.k.a. don’t mind the polarity.